How would you make your investment bets based on US-China trade war outcomes? Would you bet on an imminent resolution between Presidents Trump and Xi, or a new Cold War as some Western commentators has suggested?

Shortly before his death, financial industry guru Fischer Black published a piece on the Financial Analysts Journal (Volume 49, 1993 – Issue 5) which suggested that estimating expected return is a difficult problem, but estimating distribution can be done more reliably with proven techniques, such as those described in ia≠ai. These analytical methods aim to come up with a series of factors tied to these fundamental scenarios and use them to estimate a distribution of the returns of a portfolio. Once we have derived a description of the probability distribution of portfolio value based on what we know about those factors, we can then make specific recommendations on how the outcomes can be improved on most if not all probabilistic scenarios. This is a significant improvement over the traditional strategy of managing portfolios against a single scenario under Nobel-Prize winning Modern Portfolio Theory, which often results in excessively rosy upside estimates (as pointed out by Treynor-Black) but ignores downside outcomes. In short, while single scenario is precisely wrong, multiple scenarios can be roughly right.

1. Trade Deal Soon (20%) – In this scenario, an emerging political consensus from the Beidaihe Meeting provides President Xi room to negotiate a long-term, sustainable trade deal with President Trump. Implementation of tariffs ahead of the PRC’s 70th Anniversary on October 1 has been delayed. Unrests in Hong Kong slows down naturally with the start of the school term. No other burning issues emerge from China’s domestic agenda.  These developments give both the US and Chinese leadership breathing room to reach a sustainable trade deal.

2. Kicking The Can (20%) – In this scenario, arising from election concerns in the US farm belt, President Trump aims to reach a temporary agreement with President Xi, who is also facing challenging situations domestically. China tolerates dissents in Hong Kong ahead of the upcoming “presidential” election in Taiwan, and other domestic issues increasingly dominate its policy agenda. The temporary agreement may include China defending the Yuan exchange rate at a certain level in exchange for US refraining from imposing sanctions due to Hong Kong. This is a “kicking the can down the road” solution that increases the Republican Party’s US re-election chances in 2020 and thereby leaving more US policy hawks in place to prolong political tensions.

3. The Fight Drags On (30%) – In this scenario, China chooses not to use its foreign currency reserves to defend the Yuan indefinitely. With President Trump interpreting the development as an escalation into a currency war, there is limited appetite for any trade deal. The Republican support base from the US farm belt weakens. The market (and China) count on the US election in 2020 as one way to exit out of the tense situation.  In this scenario the fight drags on with both sides’ on-going tit-for-tat into 2020, but with more emphasis on rhetoric than substantive actions.

4. Almost a Meltdown (20%) – In this scenario, the Chinese national balance sheet continues to face a difficult situation. Some estimates have placed China’s total debts at over 300% of its GDP, but the more urgent problem lies in how China’s foreign currency debts (ranging from USD 3T to 4T by different estimates) are growing faster than its total foreign reserves and foreign assets (estimated to be about 3.5T US Dollars). In admission of the scale of the problem, China resorts to non-traditional measures (e.g. central bank providing direct guarantees to its top banks and reducing Required Reserved Ratios to historical lows) to increase the amount of foreign currencies accessible by its major banks to narrowly avoid a financial meltdown. Nonetheless, this is a recoverable crisis.

5. True Meltdown (10%) – In this worst case scenario, China faces another external trigger such as losing its developing country status at the WTO. The more hawkish factions in the Chinese Government increasingly dominate its policy agenda resulting in the use of force to put down unrests in Hong Kong (even on an entirely symbolic scale). President Trump responds by threatening the use of 1977 International Emergency Economic Powers Act (IEEPA). Subsequent Western reactions and sanctions follow (e.g. Hong Kong Human Rights and Democracy Act in US Congress) leading to Chinese banks encountering a liquidity crisis from long-standing issues such as North Korean violations. Full-blown measures and countermeasures expose certain weaknesses in the Chinese economy (e.g. bursting of its real estate bubble) and eventually hurting both the global economy and global markets.

We construct these reasonable scenarios based on historical parallels: 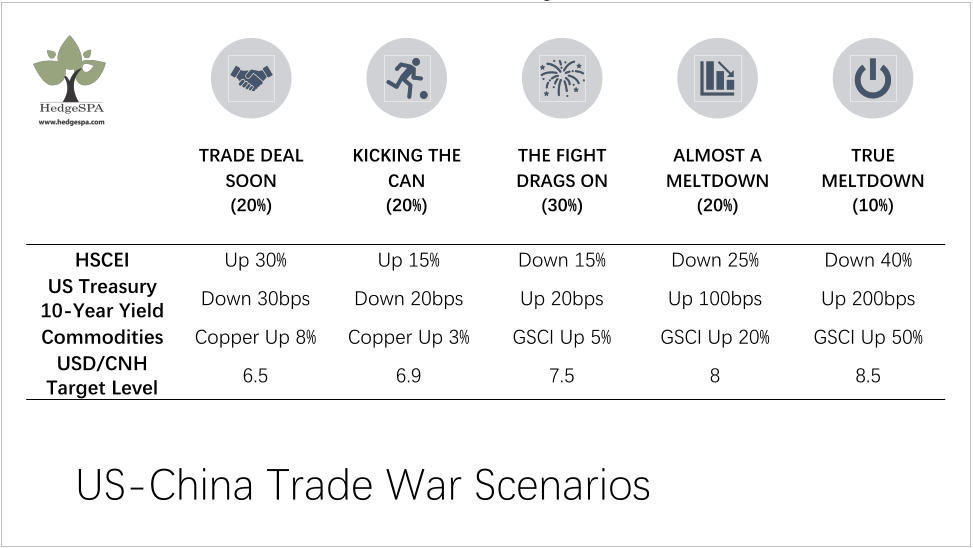 In the book, we provide similar examples of how the recommendations can result in improvements across different scenarios. While not always mathematically possible, the idea is to improve on as many of the scenario outcomes as possible, so that the overall probabilistic outcome is still superior.Results

We should note that the analytics described in ia≠ai are interesting not only in theory. The following is sample performance based on a real portfolio: E.g. In merely 1.5 months, Name Substitution generates more than 2%for this user, while Optimization and Multi-scenario Analysis (which controls the tails of the distribution) together adds another 1%. While this performance history is relatively short (other longer histories are usually subject to non-disclosure), it does demonstrate that the analytics described in ia≠ai are doing “something” right.